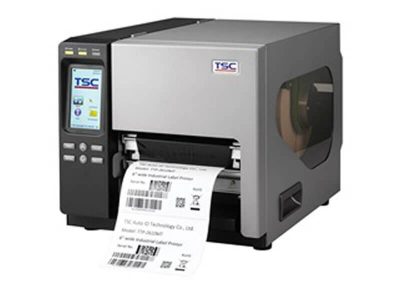 The TTP-2610MT standard features include a large color LCD touch display, built-in Ethernet, USB 2.0, USB host, parallel and serial communications as well as a an SD FLASH memory card reader that allows users to inexpensively add up to 32 GB of additional storage memory for a wide variety of fonts and graphics.

The TTP-2610MT Series features the best print quality TSC has ever offered in a wide web printer thanks to new printhead technology combined with faster processors and upgraded firmware. We call our enhanced print quality “Thermal Smart Control”™ which tracks and precisely calculates the duration that each pixel needs to be heated to provide accurate, crisp and clear labels every time, whether you are printing one label at a time or thousands of labels in a batch.

Compared to its predecessor, the TTP-2610MT is faster, performing at up to 12 inches per second and has an increased memory of 512 MB Flash and 256 MB SDRAM.

Multiple Resolutions for a wide range of applications

TTP-2610MT Series features the TSPL-EZ™ printer-control language, a fully compatible set of standard industry emulations, including Line Mode, Eltron® and Zebra® languages and will work in many IT environments including Oracle, SAP, Unix, AS/400, Windows, Stand Alone, and many more.

If you need a quote or have any enquiry with regards to the above product, please fill up the form below and we will get back to you shortly.